CicloSport K.W. Hochschorner GmbH was established in 1978 in the town of Stockdorf near Munich. Since our inception over 30 years ago we have stood for innovation in the sports electronics sector. Since CicloSport was founded the family business has developed into one of the leading sports computer producers at our time. The name CicloSport is synonymous with high quality and a variety of comprehensible and usable information. In 1989 CicloSport was one of the pioneers that offered cycle computers for the bicycle market. Since then we have continued to develop our products. Below we have listed a number of product highlights we have managed to produce in the last 30 years.

CicloSport has its own development department, in which our engineers are working on new and innovative products. The success of this work is reflected among other things in the cooperation with well-known companies in the area of eBike systems, which exist since 2010 and are being consistently enlarged.

In order to achieve CicloSport's quality standards, a process and customer oriented management system on the basis of DIN EN ISO 9001:2008 was implemented in the year 2011. This certificate after international standards keeps records about the continuous control and improvement of processes in the company. 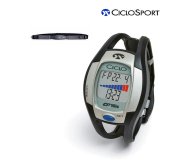